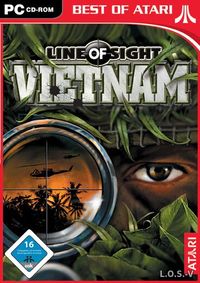 Line of Sight's gameplay is more or less completely focused on stealth. Because of the dense foliage of the jungle setting, the realistic damage model, and the accuracy of the enemy soldiers, you'll spend most of your time crawling on your belly through the underbrush, attempting to snipe opponents before they spot you. Clearing levels is an often tense, painstaking process of inching forward and then stopping every few feet to scan the horizon for enemies hidden in the trees. It's almost like a leaf-green-hued game version of Where's Waldo?, except that Waldo will shoot you in the forehead if you don't find him before he finds you.

As in Pacific Theater, nFusion's proprietary graphics engine does a great job of creating a believable jungle environment. The levels are huge and filled with plenty of rocks, trees, and plants to provide cover. You get a real sense of both being hidden and engaging hidden enemies. Spotting camouflaged opponents is ultimately the game's primary challenge. Because of this, even though the game lets you use up to 12 different weapons, the sniper rifle is the one you'll end up using in virtually every situation.

Line of Sight creates a lot of tension, and you may find yourself constantly having trouble deciding whether you should poke your head out of the underbrush for a better view, or stay safely on your stomach. But it also too often crosses the fine line that separates enjoyable tension from frustration--it's not uncommon to be suddenly killed by an unseen enemy. The game does have an option to lower the amount of damage done by gunfire, allowing you to absorb a lot more punishment before dying, but doing so unfortunately also makes enemies considerably more difficult to defeat. On the "arcade" damage level, opponents can often withstand three or four headshots before going down. Neither damage option is entirely satisfying.

But Line of Sight's biggest problem is a distinct lack of variety. Pacific Theater offered missions that took place in cities, jungles, and snowbound enemy bases, just to name a few. Line of Sight, on the other hand, consists of 12 similar missions all set in virtually identical jungle environments. While the similarity between levels may be true to the game's theme, you may start getting tired of it once you reach the fifth or sixth seemingly interchangeable level. Also, Line of Sight doesn't have the drivable vehicles that were so enjoyable to use in nFusion's previous game. In fact, other than an occasional helicopter flying overhead and a few decorative trucks, there are no vehicles, drivable or otherwise, at all. The orchestral score is excellent, though this is due in large part to the fact that much of the music is recycled from Pacific Theater. Line of Sight has squad control, but unlike Pacific Theater, which let you command four-man squads, Line of Sight pairs you with only a single partner. This is actually a shame, because the game actually seems to improve upon the notoriously unreliable pathfinding of the developer's previous games.

Gameplay primarily consists of spotting enemies before they spot you.

Line of Sight includes a surprisingly complete set of multiplayer options. The game has deathmatch, team deathmatch, capture the flag, and a mission-based attack-and-defend mode. You can also play the entire single-player campaign cooperatively. While none of this is groundbreaking (though the co-op mode is arguably a feature that should be included in more games), Line of Sight's multiplayer code is generally solid and is an improvement on Pacific Theater's.

Line of Sight is something of a one-trick pony--the game doesn't offer much more than its stealth-based gameplay. However, that gameplay is challenging enough to carry the rest of the game, especially considering its modest price tag. It's just unfortunate that Line of Sight doesn't measure up to nFusion's previous games.